Tech football has had a bit of success over the past few years. As every other tweet from Tech would tell you, the Bulldogs have won four bowl games in the past four years.

That’s a huge accomplishment. But it’s not enough for me.

The easiest way for Tech to accomplish this is to keep up the bowl streak for the next 7+ years, hopefully get invited to the Big 12 (or whatever becomes of it), and win that conference.

But this plan takes years before it could possibly come to fruition. And I’m a millennial. Two day shipping feels like an eternity, let alone a strategy that could take multiple decades.

I want Skip hoisting the generically named College Football Playoff National Championship Trophy. And I want it to happen this year. 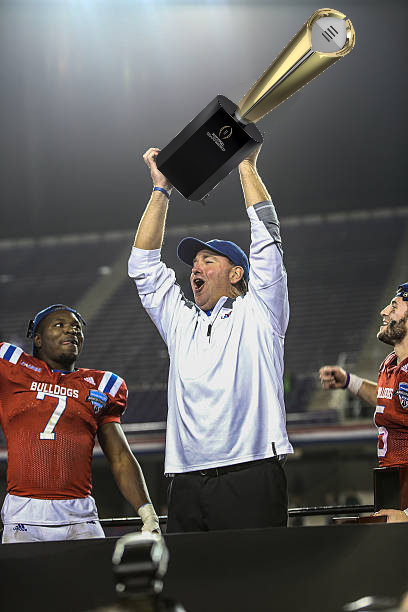 So what does Tech need to do to fulfill this totally realistic goal?

Generally speaking, for a G5 team to be considered for the playoffs, three things need to happen:

All of those are pretty unlikely, but how unlikely exactly? What are the odds that Tech (and C-USA) can achieve all three and get the Bulldogs into the Playoffs?

Before we start doing our best Jim Mora impersonations, we have to talk about get to 12-0. What are the odds that Tech gets through the regular season unscathed for the first time since 1972? To try to calculate the odds, we turn to Massey Rankings and a big ‘ole Excel spreadsheet.

Seriously, I don’t think I’ve used an Excel worksheet with 935 columns before.

Anyway, Massey Rankings gives a prediction of every FBS college football game for the 2018 season. Here’s how Massey predicts Tech’s year will go:

There are 12 games played in a season. This gives us a total number of possible game results of 2¹², or 4096. Then, using the Massey percentages from the table above, we can find the odds of each of those results.

So let’s find the odds of a particular season scenario (like winning all the games). For that, we multiply the % values in the RESULT column above. And if we want to see the odds that Tech loses every game? There we find what’s called the complement percentage, or 1 minus the number. But losing every game would never happen, right? Right guys?

As an example, let’s find the odds that Tech will achieve the most likely scenario of a 9-3 record with losses to LSU, FAU, and Mississippi State:

Now we do this 4,096 times and group the games by the record of each scenario. And now that we have that hard part out of the way, we put them in a neat chart: 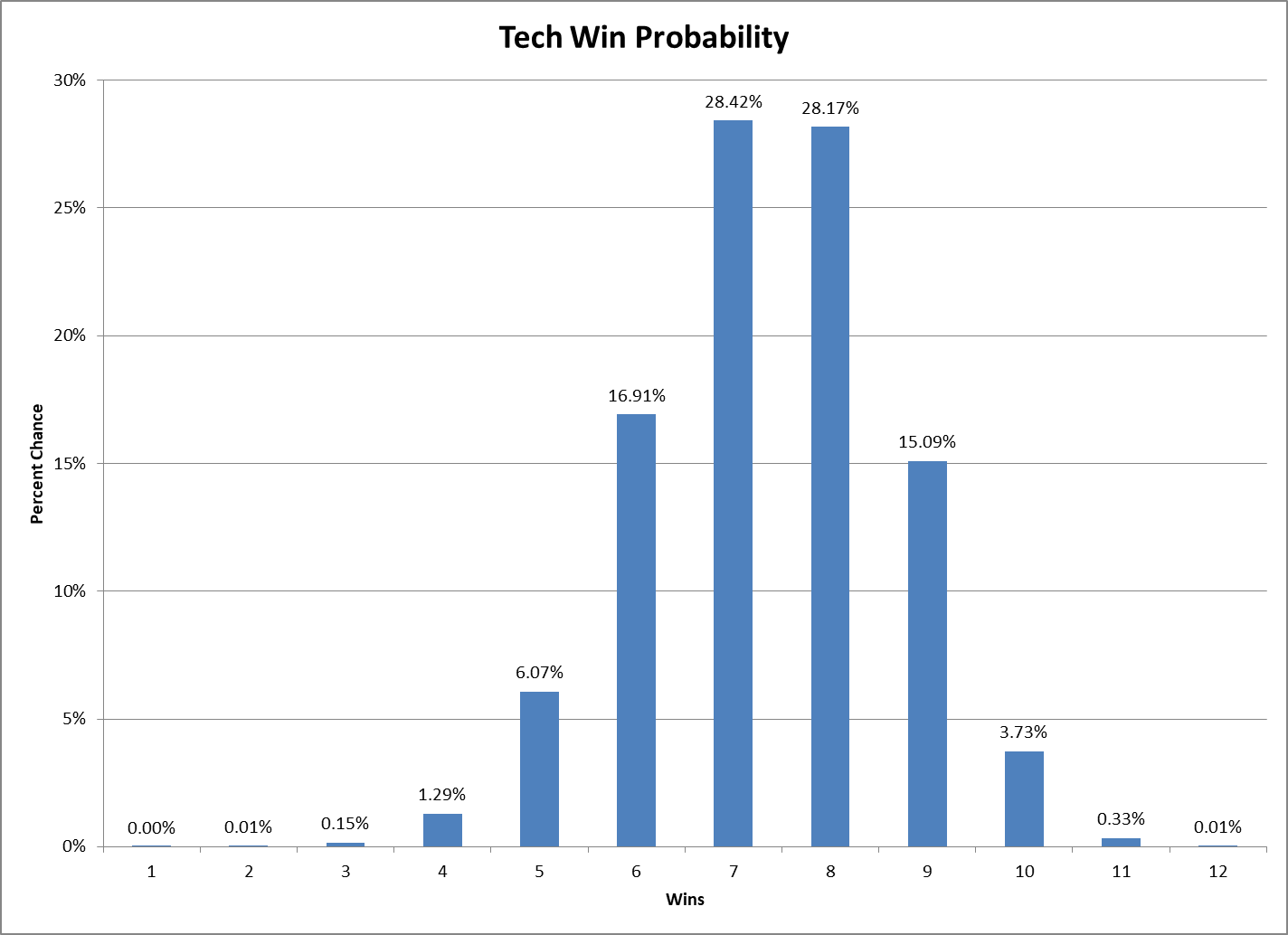 Out of Conference Opponents

One of the biggest argument against UCF last year was that they had a weak OOC schedule. The Knights played OOC games against FIU (Massey Rank: 111th), Maryland (65th), and Austin Peay (191st).

Tech, on the other hand, benefits from playing two SEC teams in LSU (14th) and Mississippi State (20th), but also play some weak competition in South Alabama (133rd) and Southern (311st). So not only will Tech need to play better, the Bulldogs’ opponents will need to improve their rankings.

Tech will need to rely on strong seasons from LSU (it burns when I say that) and Mississippi State. Luckily, both schools are projected to have decent seasons. To make the math work later, we are going to assume both teams lose to Tech: 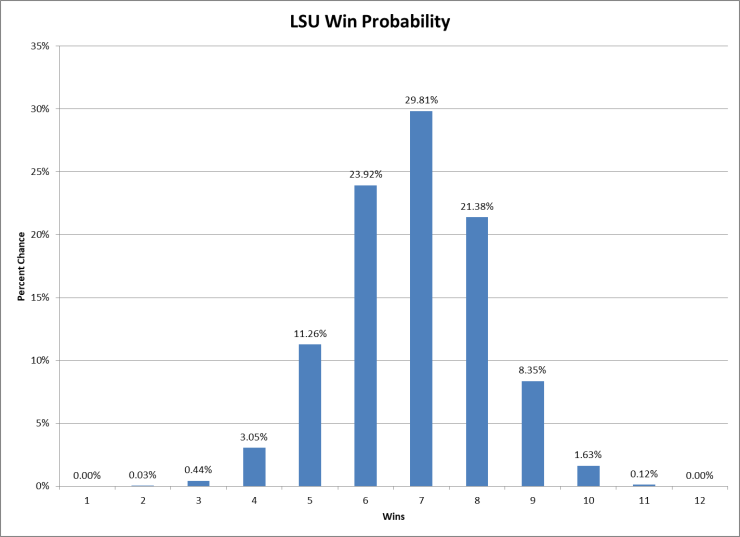 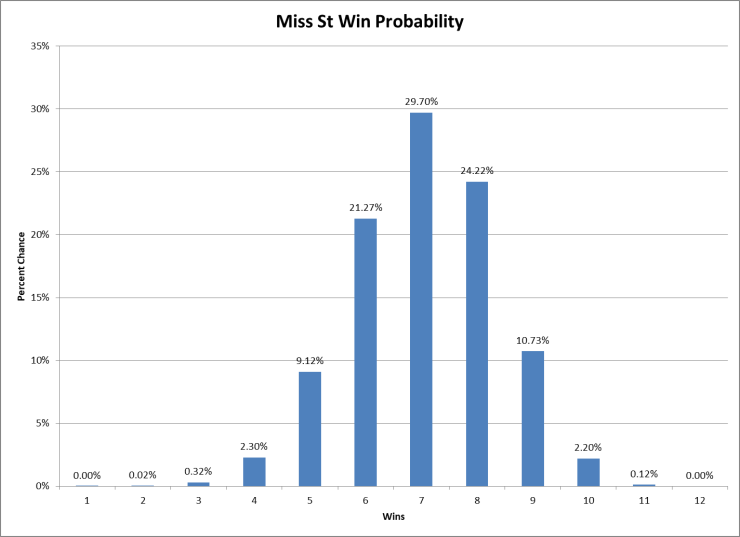 I think that for the SEC teams to be a positive influence on Tech’s strength of schedule, both teams will need to win 8 games each. And by looking at the charts above, that shouldn’t be impossible.

But the Bulldogs will also need help from South Alabama:

I think South Alabama will need to at least get bowl eligible for Tech to have a shot at a playoff birth. The odds that USA goes 6-6 or better are just above 20%.

Not only does Tech need to have an amazing year, C-USA does as well. If the conference performs like it has the past few years, it will be used in arguments (probably made by Skip Bayless) against Tech making the Playoffs. But it would only be because Tech’s playoff run would make Bayless the Undisputed™ lesser of the two Skips.

But now let’s break up what C-USA will have to do to get Tech into the playoffs:

First, let’s look at FCS games. Here are each C-USA squads odds to beat their FCS:

Note: UTSA does not play a FCS school this year.

UTEP’s really bringing us down here with their projected 30-20 loss to the Northern Arizona Lumberjacks.

Now we put that in our Excel Win Probability Machine Thing™ from earlier and get: 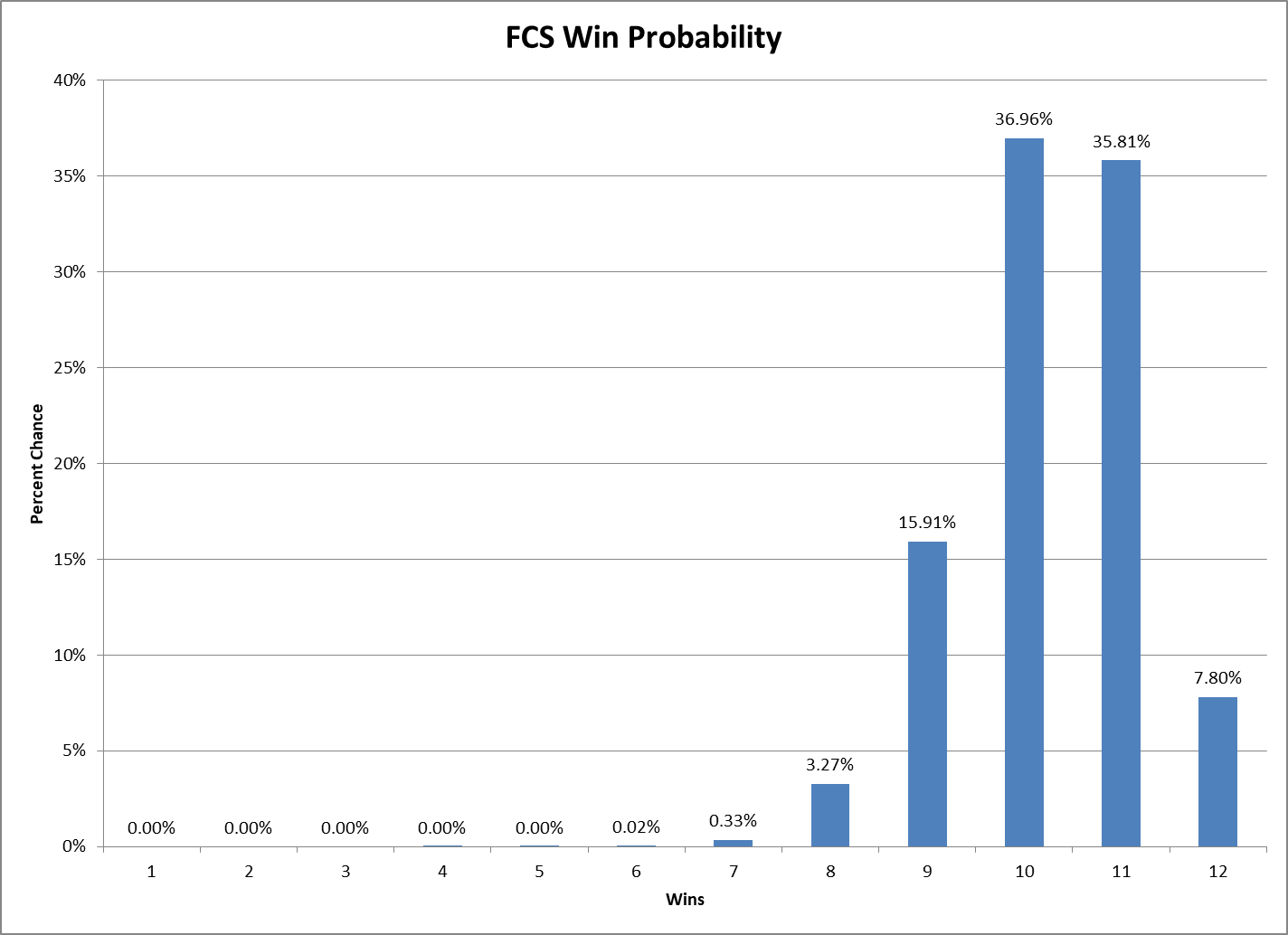 But now to P5 play. C-USA (outside of Tech) plays 16 games against schools in the ACC, Big 10, Big 12, SEC, and PAC-12 conferences. The C-USA team is expected to win exactly zero of them. Here is a chart of the probabilities of the C-USA team winning each game: 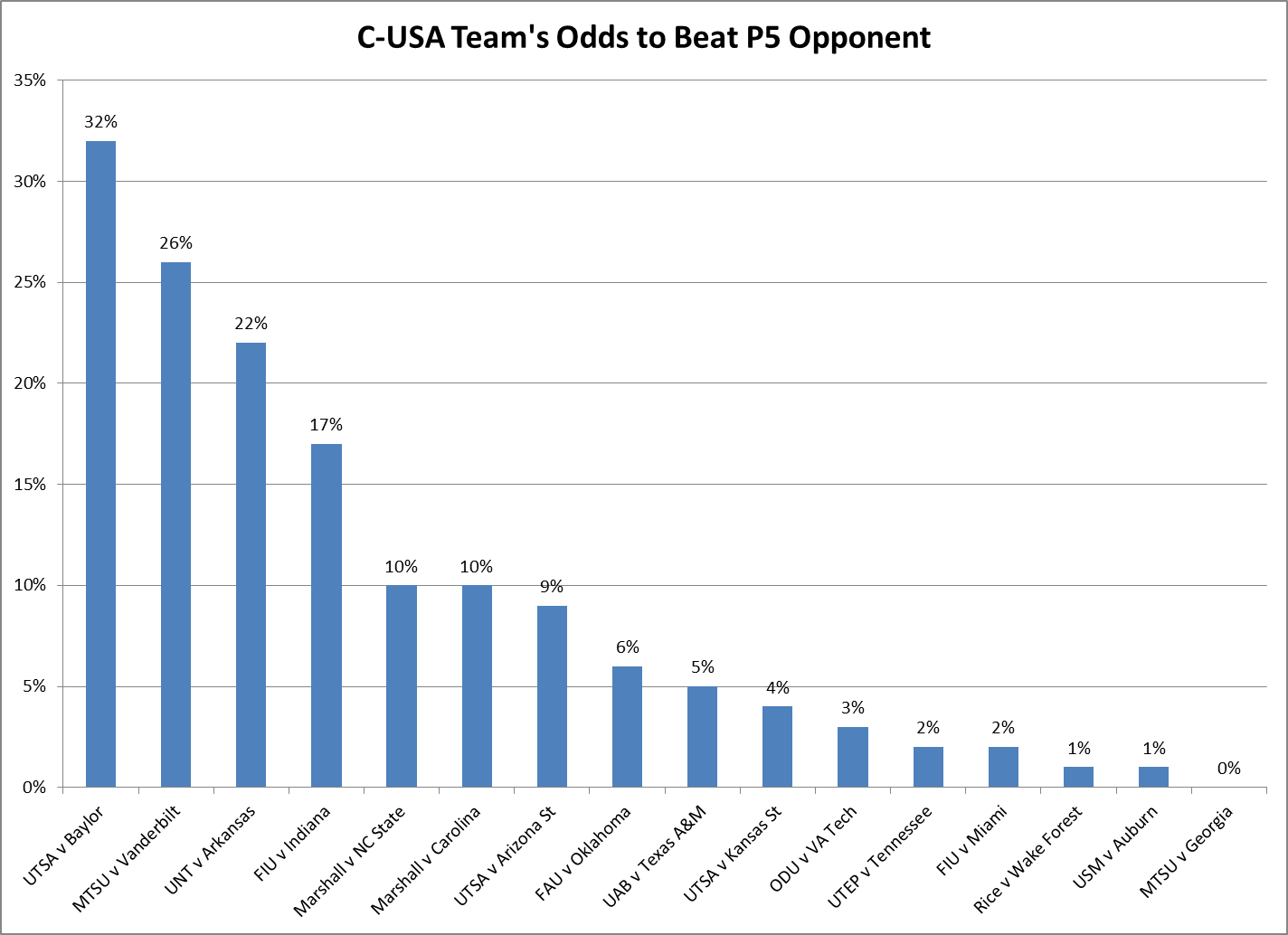 Luckily, C-USA doesn’t need to win all of these. But it does need to win some. In 2017, the worst P5 v P5 record was by the ACC, who won 5/13 of games against the SEC. So that’s the percentage we’re going to aim for. If we want C-USA to look comparable to a P5 (spoiler alert: we do), then we need to shoot for C-USA to win six out of the sixteen games from above. 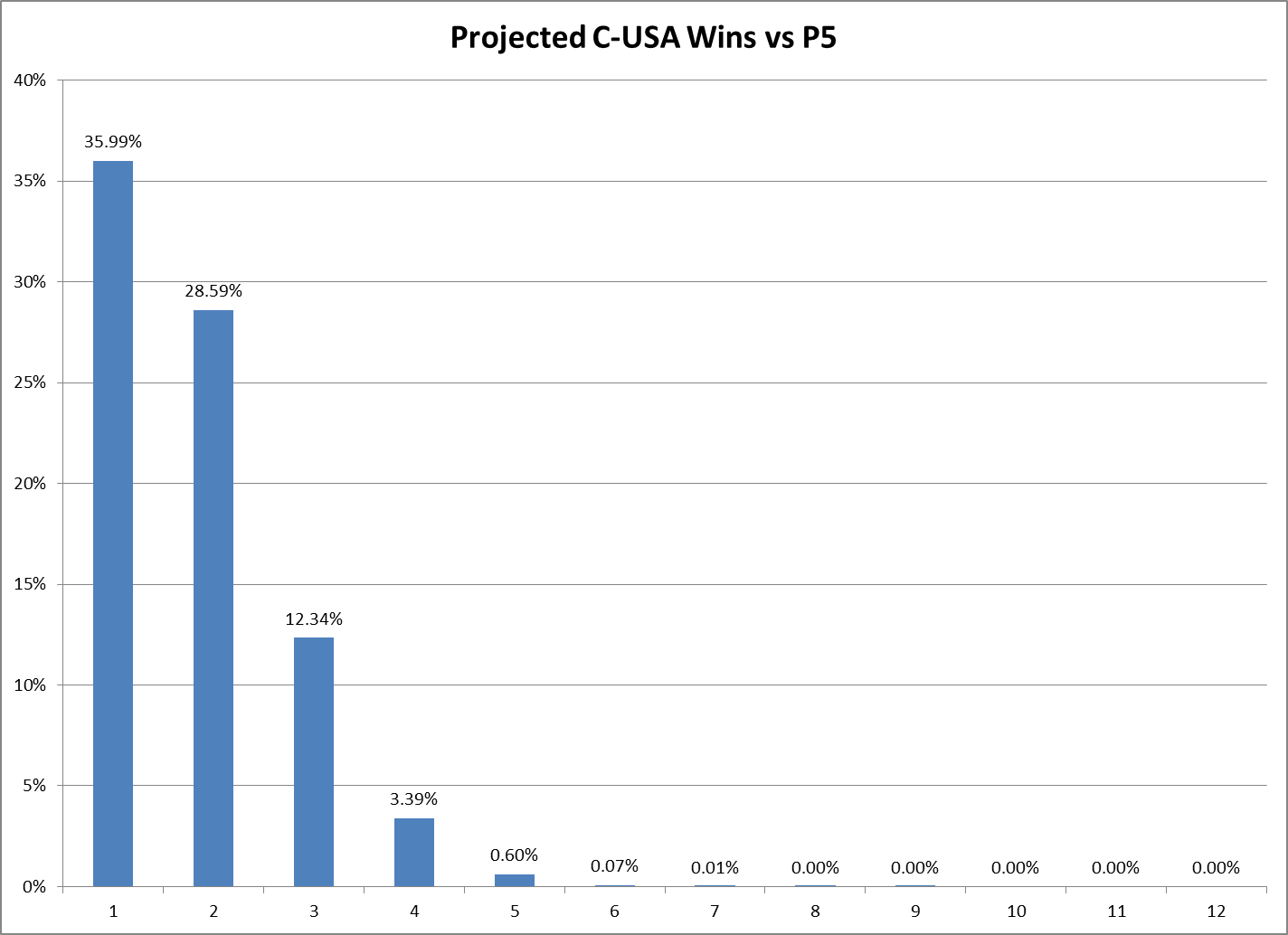 Putting it All Together

We’ve calculated a lot of different percentages so far. Now comes the part where we put it all together. Here are the numbers so far:

These are all the things that need to happen for Tech to be in the conversation to get into the College Football Playoff.

To find the final % number, we need to multiply the numbers in that table together:

That just seems so impossibly small. So I had to compare it to some other unlikely things:

And still, it’s not a guarantee Tech gets in.

I think I’m going to lay down.

1 thought on “How Hard Could It Be To Win A National Championship Anyway?”