Nathan: If you read my prediction in the Preview post, you’ll understand that I’m not too surprised in the final score. Like the last couple weeks, I was right about how close the game would be, but not about how the game got to that point.

I was mostly scared of the UTEP running game, specifically QB Locksley and RB Wadley. Well, Locksley didn’t play and Wadley only had two carries. Instead the Miners aired the ball out, but even then, the visitors only experienced moderate success.

But UTEP’s offense wasn’t what almost won the game for the Miners. Instead, it was Tech’s lack of gaining any kind of momentum on offense. Some of that is on J’Mar, some of that is on playcalling, and some of that is on coaching. But something needs to change for the Bulldogs to have a prayer at the C-USA Championship (even with the help the Miners will provide next week when they beat UAB).

Evan: Yikes. If it wasn’t for Jaylon Ferguson, we’re dealing with full on Tech fandom melt mode. I’m not sure what to think of the offense right now. It seems like we have a general lack of playmaking talent–which isn’t true; a lack of good play-calling–which shouldn’t be true; and a lack of anything resembling a rhythm. Tech’s offense right now is like me on the dance floor at a wedding, except not drunk. Defensively, the team played decently, other than when Metz ran the read option in the third quarter. It’s hard to fault the defense in a game like this, because the offense only did enough to tie with freaking UTEP. Luckily, a Sneed was the only Thing-That-All-Bulldog-Teams-Need(ed) to win the game. His pick-six put the first points on the board, and those points ended up being the difference.

Daniel S: Tech did not go but managed to not die. Our student body must have painted themselves with invisible ink before the game.

Matt: Ferguson deserves better than the team he’s on. Inexplicably, Tech is one win away from bowl eligibility.

Nathan: Tech didn’t die, but the offense seems to be on life support.

Evan: “go tech pls don’t remain in your vegetative offensive state” doesn’t really have the same ring to it, does it?

Player of the Game

Nathan: The obvious answer is Ferguson (as it is most weeks), so I’ll let someone else take him. I’ll go with Jaqwis Dancy. The junior only rushed 12 times, but there was a noticeable difference when Dancy was in the game, even if he didn’t touch the ball. And I believe Tech may not have won this game if it weren’t for his 45-yarder in the first quarter.

Evan: All hail His Grace, Jaylon of the House Ferguson, First of His Name, King of the Techsters and the Bulldogs, Lord of the Sack Kingdom, and Protector of the Realm. 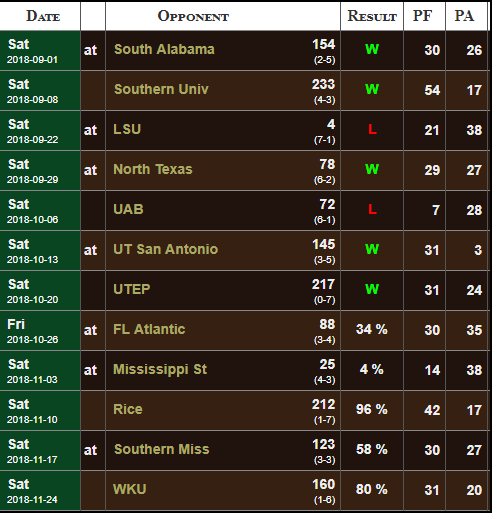 This week’s contest featured 31 players, including five first timers! Welcome new players–some of you did quite well this week.

In keeping with recent tradition, a member of gtpdd almost won the contest, only to be defeated by one point. Last week it was me. This week it was Nathan, who lost by one point to JC, our big winner with 17 points! Also of note, all five newcomers I mentioned above scored in double digits! Every week you have a shot to come play and win prizes.

The top of the leaderboard continues to get more and more intriguing. With three weeks left to go until the playoffs, a monster week can catapult you up, while a bad showing can knock you out of the top ten. For example, our perennial Contest champion Daniel Adams only scored 6 this week and fell from fourth to eleventh. We’d be foolish to count him out, though!

Here’s a look at the current top ten:

As a quick note, I may have to come up with some tiebreaking scenarios to decide who gets into the contest playoffs. I’ll state ahead of time what they are, just in case.

Let’s get to the recap!

Answer: Tech won by 7. No one picked Tech by anything close enough to score 5 points. Note to self: next time I’m listening to the NCAA 14 simulation, which had Tech by 7. #10 Nathan came closest here by predicting Tech would win by 10 points.

Question 3: How many total yards will UTEP gain in the game?

Answer: UTEP gained 356 yards of total offense in the game. #2 JC scored three and came the closest by guessing 369, nice.

Question 4: How many first downs will Tech have in the game?

Answer: Tech had 19 first downs in the game. This question was a point-scorer. 14 of 31 entrants scored 4 or 5 points on the question. Despite the fact that almost half of you came within 3 of the actual number, only one got it dead on–#3 Justin Brazzel.

Question 5: What will happen on the first play from scrimmage in the fourth quarter?

Answer: UTEP RB Josh Fields ran for 6 yards, meaning that choosing “A completed pass or run for positive yardage” was correct and gained you two points. Only 4 players got this one wrong.

Question 6: Which of the following will beat their average rushing or receiving yards in the game: Hardy, J’Mar, George Scott, Dancy

Answer: Dancy was the only player to surpass his season average in rushing and/or receiving yardage gained. Therefore, anyone who only checked the box for Dancy got all four possible points. Five players pulled this off: #48 Brett, #44 Mah Dick, #10 Nathan, #12 Wild Card, and #52 William Griffith. Three of those five are contest newcomers this week! As for everyone else, you got 1 point for checking Dancy and 1 point for each player other than Dancy that you did not check the box for. These questions are extra hard to grade, so if I messed yours up, just let me know and I’ll fix it.

Bonus: Paydirt Pete has a furnace that smelts 10 oz. of copper per minute that UTEP possesses the ball. UTEP’s offense mines copper ore at a rate of 1 oz. per yard gained. Will UTEP have any leftover unsalted copper ore at the end of the game?

Answer: UTEP’s Miner offense mined 356 ounces of copper ore in the game. They possessed the ball for 32 minutes and 49 seconds, allowing Paydirt Pete to smelt 328 ounces of copper. So if you picked “Yes, UTEP will have leftover copper that has not been smelted”, you were correct! 16 of you got this one right. That’s a good bonus question!

A little housekeeping note: Next week’s contest is for a game that happens on Friday night. I will do my best to have the contest posted on Tuesday evening to help make up for the early game time.