Another year, another round of Tech fans calling for the basketball coach’s firing due to transferring players:

Maybe if I refresh Twitter again Konkol will transfer

To be fair to hot taeks like this, Tech fans have every reason to be this upset. The duo of Duruji and Langston won’t exactly be the easiest to replace. The Bulldogs did get quite a bit out of them last year:

But in the defense of the Konkol (which I have said so often I should start charging a retainer), I can point to several places saying transfers are at an all-time high. Players are leaving programs all over the country for what seem like greener pastures. Some sports journalists are even calling this phenomenon a “transfer epidemic.”

So I’d like to see how Tech compares to it’s peers (and by peers I mean C-USA), to see if Konkol deserves the mean tweets. Well, at least the ones about players leaving.

But first, let’s look at the transfers from Tech on a year-by-year basis. Is losing Duruji and Langston this off-season better or worse than what we’ve seen in previous years?

To compare these departures, let’s use the one stat that objectively good players always have more of: minutes. Comparing a rebounder type (example: Duruji) to a scorer (example: Bracey) is difficult, but typically the best players play the most minutes (unless your dad is the coach). If someone with a lot of minutes in the previous year leaves, it is likely a bigger blow to the program.

Because we are comparing across multiple years, we need to look at a player’s minutes divided by the total minutes played by all of the players on the team. This is because of pesky things like overtime and extra postseason games that allow for some year’s players to play more than others.

So now that we have our stat, let’s compare the past few off-season departures for Tech : 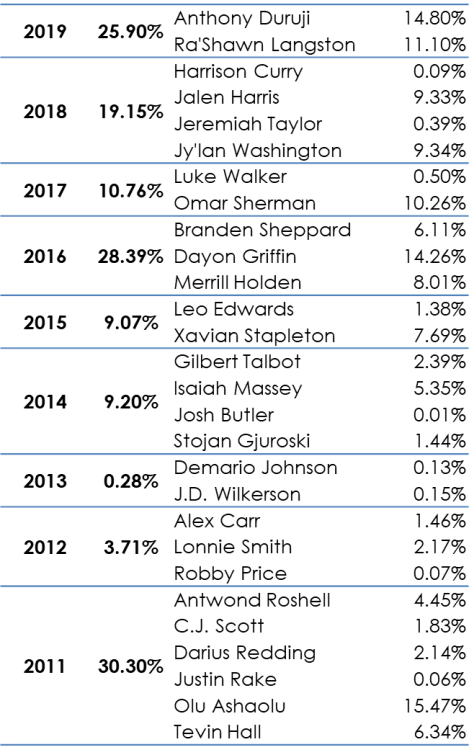 It’s important to point out a few things before we really dive into this data:

Regardless, this stat is probably about as good as we’re going to get because we don’t know for certain how these players would have contributed if they had stayed in Ruston. Let’s go ahead and see a more visual representation of these past few years: 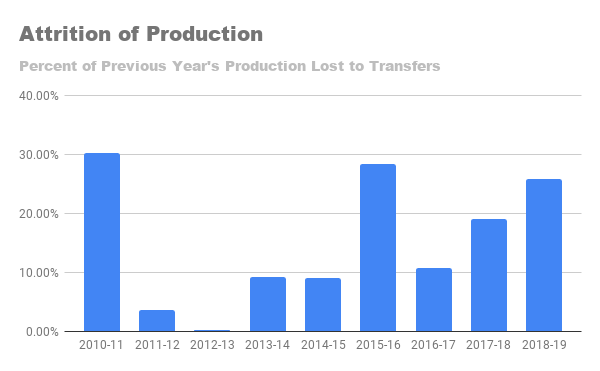 So outside of the Rupp-departure-spike, it does look like we’ve been more effected by transfers in recent years.

But isn’t that what we should expect? If the number of transferring players really is increasing, we should see more leaving Tech.

What would be worse for Tech is if we lost more players than the average basketball program. To see if that’s the case, we need to compare the past few years of transfers in C-USA:

So Tech has been in the middle of the pack for the past two years, but they did lead it back in 2016.

I mentioned earlier that coaching changes often effect transfer rates. For example, Rice’s 68% transfer rate in the 2017 off-season was in large part due to coach Mike Rhoades leaving for VCU.

So let’s combine these past three years into one big ole’ chart and remove the years that were effected by coaching changes:

Oh, and for comparison’s sake, let’s add this off-season for Tech (Duruji + Langston)

So we can see when it comes to losing quality players to transfers, Tech has consistently been in the top half of C-USA.

But what could Konkol do to reverse the trend and retain these players?

Maybe these players wouldn’t want to leave if Tech just won more games? Athletes want to win, right? If a team wins a lot of games, a player on that team should be less likely to leave.

So even if transfers weren’t something Konkol could directly control, winning should be. So if Tech won more games (or made the tourney), players like Duruji may not have transferred out. At least that’s the idea.

Let’s plot this out (using those past three years of C-USA teams): 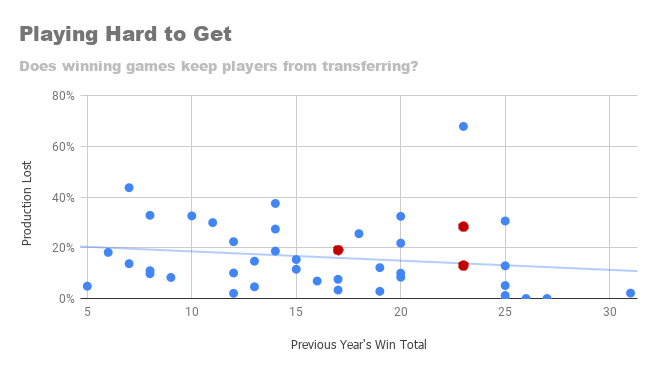 This chart includes data from coaches who had left the program, because players might still stay with a new coach if the program has been successful.

We see a slight trend downward, but not much of one. This would mean players on bad teams are only somewhat more likely to leave than those on good teams. But let’s go ahead and get rid of those departing coaches: 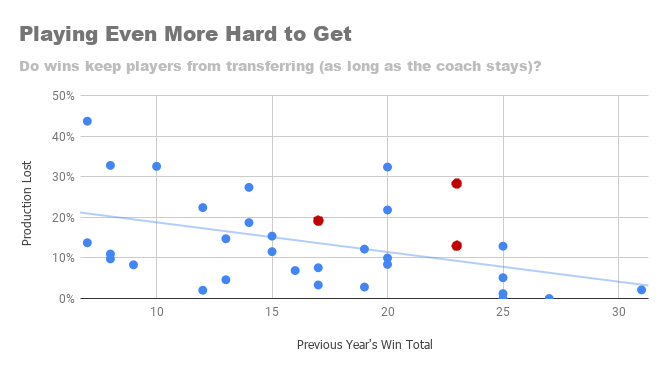 That’s a much more defined downward trend. This shows that the better a team does, the less production transfers out. It seems like common sense, but it’s nice to see that assumption supported by the data I’m basing the whole post on.

The next idea I want to test is how teams are affected by the transfer process. Do teams that lose a lot of production win fewer games the next year?

The obvious answer would be yes, but let’s chart it out anyway: 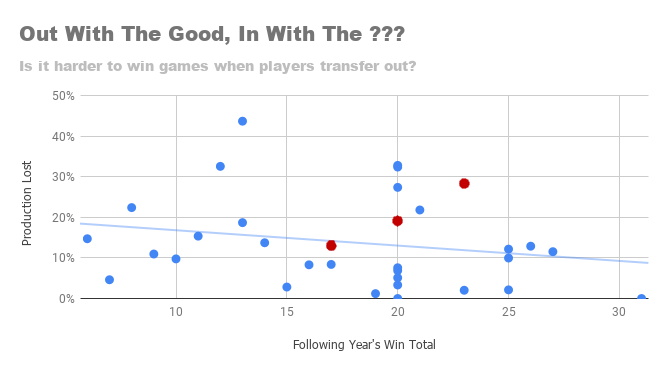 Okay, well, the answer is yes, but not as drastically as I expected. Maybe this is because almost every team is losing some amount of production to transfer?

Also, two of Tech’s red dots are above the trend line and the other is just below it. This tells me that Tech has won more games than the average team that lost the same amount of production.

So maybe Konkol does lose more players to the transfer process than many other C-USA teams. But he is able to produce more wins despite that than almost anyone else in the conference. Like a superhero that slightly destroys a city to save it.

But those are comparing the team to the rest of C-USA rather than the team itself. I want to see how a win total changes for an individual team in relation to production lost: 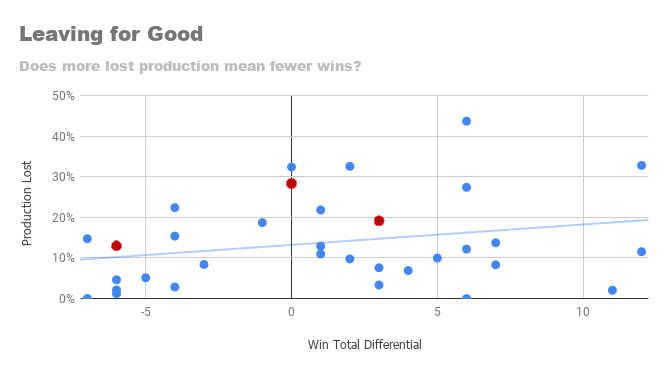 So yeah, this is surprising, the line is going up. On average, the more production is lost, the better a team improves it’s win total the next year (although only barely).

This could be due to things such as a small sample size or other variables like graduation and incoming recruiting rankings. But what this chart really shows is even with Duruji gone, we shouldn’t give up hope for next year.

Tech does lose talent every year to transfers, but so does the rest of C-USA as well as every other team in the country. Suggesting this is a Konkol-only problem is being blind to the basketball world outside of Ruston.

As to the why more players are transferring, it’s not a simple question. As far as Tech specifically, former Bulldog Alex Hamilton has some insight:

Washington also returned to his home state…and I bet you if you asked the other guys that played for konkol and are leaving I’m sure Konkol would not be one of the reasons. Ruston is not an easy place to live and it is a hard to recruit and keep players there. https://t.co/UV9lwOUXao

We want the problem to be Konkol because that provides us a simple solution: we fire Konkol. But whoever replaces Konkol would face the exact same challenge. How do you keep players in Ruston?

1 thought on “Preparing for Departure”