Evan: Yiiiiiiikkkkkeeeeesssss, man. What on Earth were we doing in the second half? It’s like when all the fans left at halftime, so did Skip’s play calling, our offense’s ability to get more than one first down on a drive, and our defense’s ability to tackle before Grambling had picked up 12 yards. I’m absolutely baffled after that performance, and I really don’t know how this season is going to shape up. The good news is, we play a lot of bad teams the rest of the way. For the record, I usually hate this excuse, but it seemed like in the second half specifically, Tech was being very “vanilla.” Other than the toss sweep play to Smoke Harris (WHICH DIDN’T WORK GDI), it was very by the book. I need to see more from this offense (and this defense) before I know what to expect this season.

Daniel S: *I will only be giving my thoughts on the first half of the game* This week the defense took the same bend but don’t break approach that we saw last week against Texas, but this time it actually worked, forcing a big time 4th down stop deep in the red zone on Grambling’s first drive of the game. Offensively our run game drastically improved this week rushing for 170 yards. Overall we didn’t play as well as we should have but there still is really no way to tell how this season will go.

Nathan: This was a game of two halves. I was content with being up 20-0 after 30 minutes, but the second half was a joke. I had been worried about Tech’s ability to close out games, but I was really hoping I was as wrong about that as I was about Texas.

Josh: Full disclosure here: I left after halftime. I wanted to stay, but I literally couldn’t take the heat. And I figured since Tech was up by 20, the game was pretty much done. Boy was I wrong. I can’t say too much since I was recovering in my car for most of the second half, but that was a total failure of a second half. Just from looking at the play-by-play it seems like it all falls on the coaching and play calling. Six passing plays in the second half? Six??? Unacceptable. I’m not a fan of running out the clock that early, or easing up on a team because you’re up by double digits. Don’t play timid, Skip. Keep your foot on the gas and win like we should against an FCS team.

Evan: They sure as hell tried their best to die after not going out for the second half.

Daniel S: I wouldn’t say they went but a win is a win.

Nathan: I had the “The last time Tech lost to an FCS school, they made the C-USA Championship” tweet ready to go after the onside kick, but luckily the defense just barely did enough to keep Tech on life support until the clock read 0:00.

Josh: Tech didn’t die, but I almost did.

Player of the Game

Evan: Connor Taylor (LB). My dude was all over the place and ended up forcing a fumble that was the difference in the game. Plus, he has magnificent plumage (as the NFL Network analysts so astutely observed).

Daniel S: Evan stole mine, but I don’t really care. Connor Taylor was excellent yesterday. With 11 tackles and 1 forced fumble he is quickly show that he might be the best player on defense not named Amik Robertson.

Nathan: Bailey Hale. 2/2 on field goals and 2/2 on XPs. After the misses last week, Hale scored 8 points in a game that we won by 6. We needed him this week and he delivered.

Josh: I’ll give it to Brady Farlow. Solid punting when we shouldn’t have to punt at all. 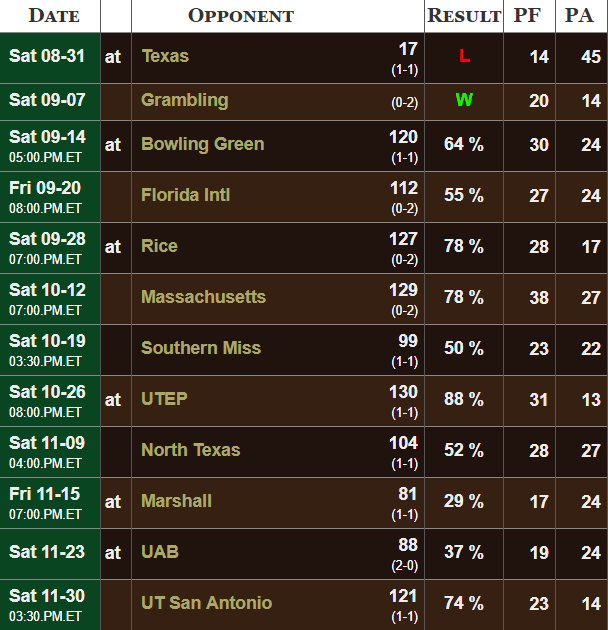 This week we had 53 players, including 12 brand new players and 41 returners from last week. Those 53 players scored an average of 9.2 points, down from last week’s 11 points.

The main problem with the scoring this week was that almost no one picked Tech to win by a low enough point margin to pick up points on question #2.

This week’s winner was another Basinger (they’re dominating the contest this year so far!): #1 Brian Basinger, who put up a whopping 17 points. We also had #8 Colby Ashley put up 15, then had five players tie with 14. Good showings all around!

Remember that this season I’ll be dropping the worst game from everyone’s contest total, so even if you miss one week you can still win! I’m not sure, but I think I’m going to drop the lowest score BEFORE the Bowl game (assuming Tech wins six games lol), so everyone knows where they stand going into the last week.

As always, head to the Standings Page to check your scores and see where you stand!

Results: To score on this one, you had to say Tech would win by between 1 and 16 points. Only 3 players of the 52 that picked Tech to win were pessimistic enough to be correct. #45 Allison Hurst got the closest with her guess of 4 points, picking up 4 points.

Question 3: True or False: Tech scores more in one quarter than Grambling does in the entire game?

Answer: FALSE. Tech scored 13 in the second quarter, and Grambling scored 14 in the game.

Question 4: Predict the total kickoff and punt return yards for Tech players in the game.

Answer: 102 yards. Smoke had two really nice kick returns for an average of 37.5 yards, and Michael Sam had a pretty good punt return, too.

Question 5: Predict the average yards per passing attempt of Tech QBs in the game.

Results: You had to be within 7 yards (again, seems like too many) to score any points here. 48 players scored at least some points. You had to be within 0.5 yards to get full points (8.3 thru 9.3). 6 players did that: #4 Taylor Young, #1 Brian Basinger, #22 Beau, #8 Colby Ashley, #4 Chase P, and #2 Carson Basinger. Clearly the wheat separate themselves from the chaff on questions like these.

Bonus: Will any points be scored within one play through of Day-O (Banana Boat Song)?

Answer: The song runs 3:07 as recorded by Harry Belafonte, and Tech scored the first points over 12 minutes into the game.

Results: 26 players (a little under half) got this one right and picked up two points!

Check back Wednesday morning for the next edition of the Contest!